Under the Existing Guidelines section, a list of selected guidance materials on SIMEX for further reading is recommended. That includes guidance materials published by the WHO, Swedish Civil Contingency Agency, Government of New Zealand, etc.


This guidance document is part of the UNDRR's Words into Action Guideline series on practical implementation of the Sendai Framework for Disaster Risk Reduction Priority 4 component on enhancing disaster preparedness for effective response. The current version of the document a public review version which is a product of a long and detailed process of drafting, consultation and review. This document is now on the PreventionWeb for public review until 14 December 2019. For more information, please visit the review page. 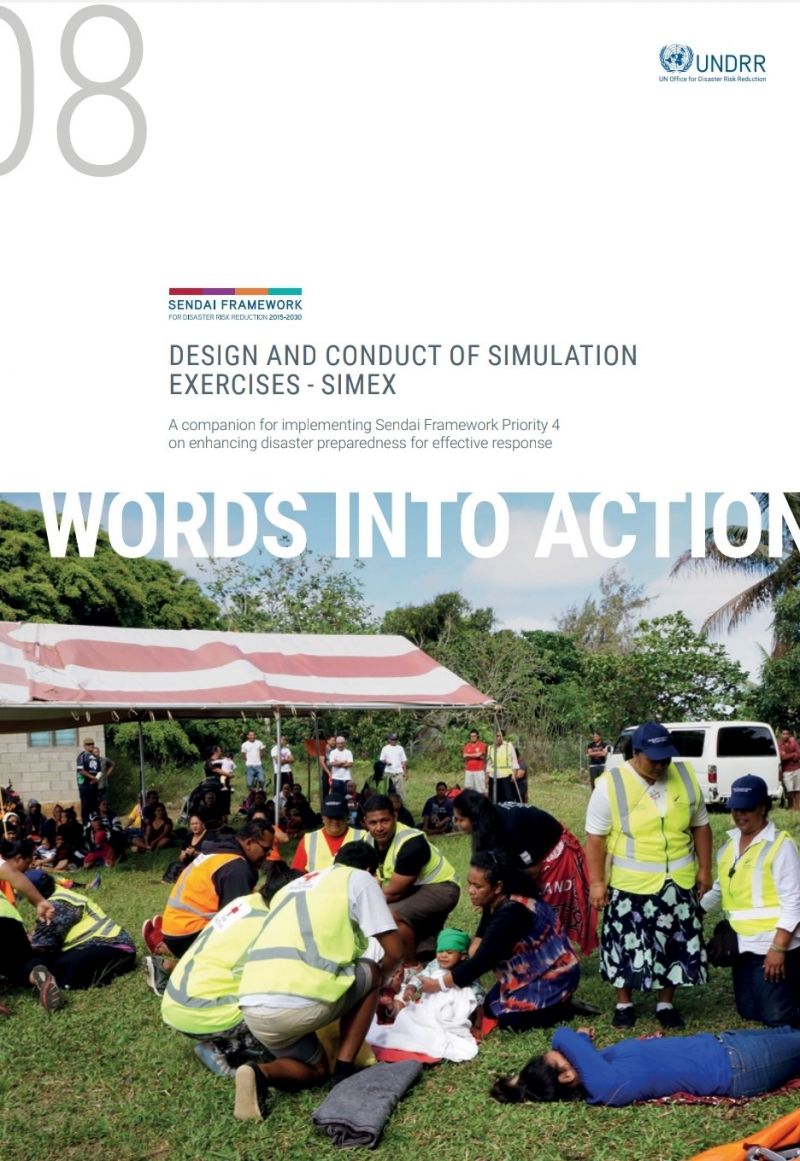 An exercise decision tree, such as displayed in the WHO Exercise Manual 2017, can facilitate the choice of exercise type. 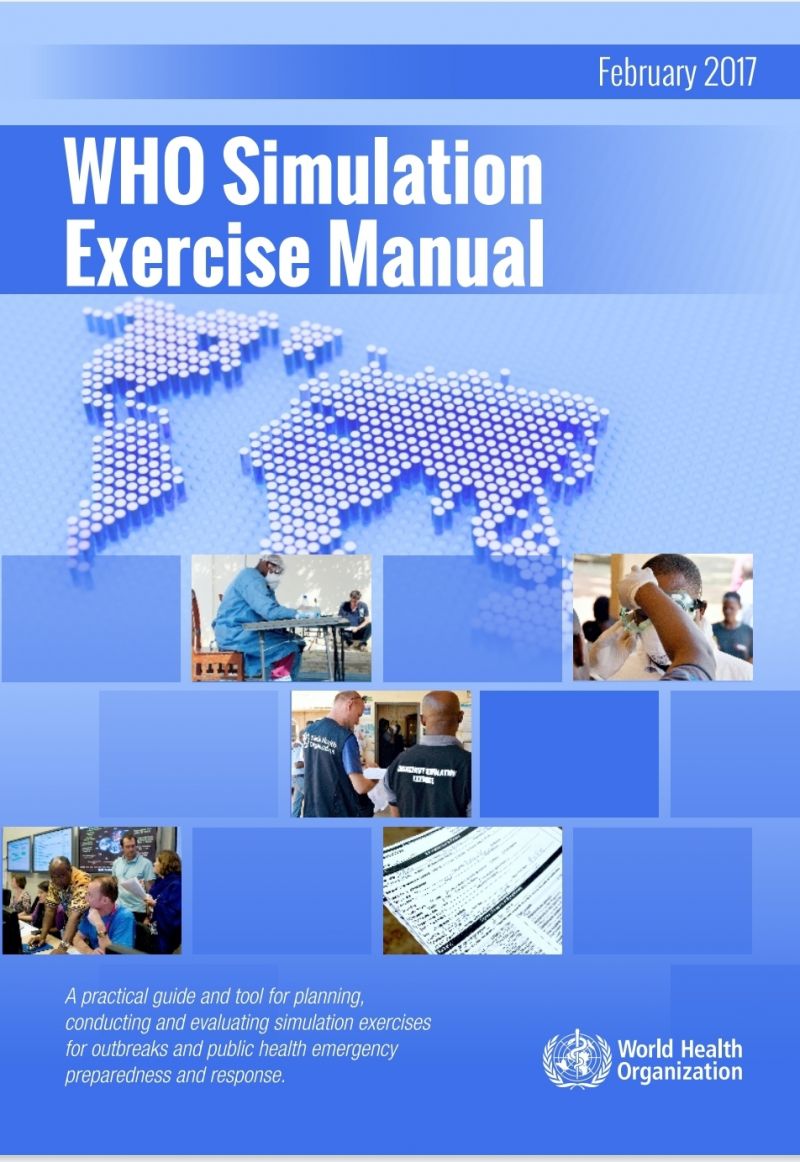 The <WHO Simulation Exercise Manual> is one of the selected guidance recommended in the <Words into Action guidelines - Design and conduct of simulation exercises - SIMEX (public review version)> guidelines. 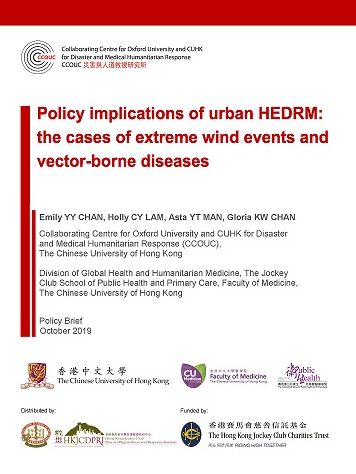 30/10/2019
Policy Brief – Policy Implications of Urban HEDRM: The Cases of Extreme Wind Events and Vector-Borne Diseases
Natural hazards have direct and indirect health impacts. Apart from physical and mental trauma, other health impacts include malnutrition, disrupted disease treatment plans, and risk of infectious diseases. Health impacts may be mitigated through health-related emergency and disaster risk management (Health-EDRM). They are systematic analysis and management of health risks through the reduction of hazards and vulnerability in all stages of the disaster management cycle, from prevention/mitigation, preparedness, response to recovery (Lo et al., 2017; World Health Organization [WHO], 2019).

Natural hazards have direct and indirect health impacts. Apart from physical and mental trauma, other health impacts include malnutrition, disrupted disease treatment plans, and risk of infectious diseases. Health impacts may be mitigated through health-related emergency and disaster risk management (Health-EDRM). They are systematic analysis and management of health risks through the reduction of hazards and vulnerability in all stages of the disaster management cycle, from prevention/mitigation, preparedness, response to recovery (Lo et al., 2017; World Health Organization [WHO], 2019).

11/10/2019
COPE: A Storybook Series to Help Children Get Ready for Disasters!
A global disaster book series is now available free-of-charge in Hong Kong for our kids!

A global disaster book series is now available free-of-charge in Hong Kong for our kids!


The COPE Squad from the picture book series, COPE, is here to teach all Hong Kong kids how to Get Ready and Be Prepared in face of disasters! Under the guidance of Grand Mistress Fu, the four main characters of the series, namely Candy, Ollie, Ping and Eddy form the COPE Squad and undergo intensive training on natural disasters and how to be prepared. COPE's mission is to educate children from all over the world, so they can become COPE Champions to act as disaster role models in their community. 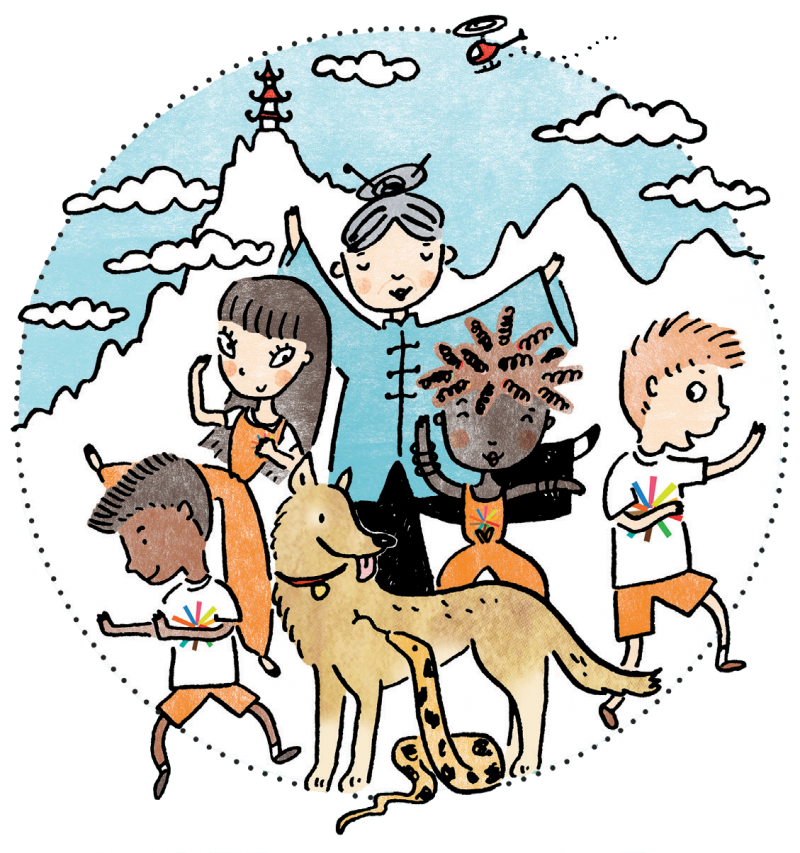 COPE is a series of fun, innovative and beautifully illustrated children’s books intended for global distribution to increase the disaster resilience of children. According to the Sendai Framework for Disaster Risk Reduction (2015-2030), which was adopted at the third United Nations (UN) World Conference on Disaster Risk Reduction in March 2015, children have a vital role to play in reducing risk, strengthening community resilience and shaping legislation to better protect against disasters. COPE’s touching and humorous illustrations will capture children’s imagination to teach them simple steps for disaster preparedness, which may one day save their lives.


The book targets at young readers aged 9-11 and parents reading to their children, aged 4-8. While the COPE books are written primarily in English with collaborative efforts from various contributors, the Hong Kong Jockey Club Disaster Preparedness and Response Institute  (HKJCDPRI), together with the Hong Kong Observatory and Dr Kwan Che Ying, Associate Professor, Centre for Advancement of Chinese Language Education and Research, The University of Hong Kong, have localised the contents of the book for Hong Kong readers. Today, two books, the Earthquake! (“地震!”) and Get Up To High Ground (“走上高地”) (for Tsunami), have been localised and translated in Chinese. 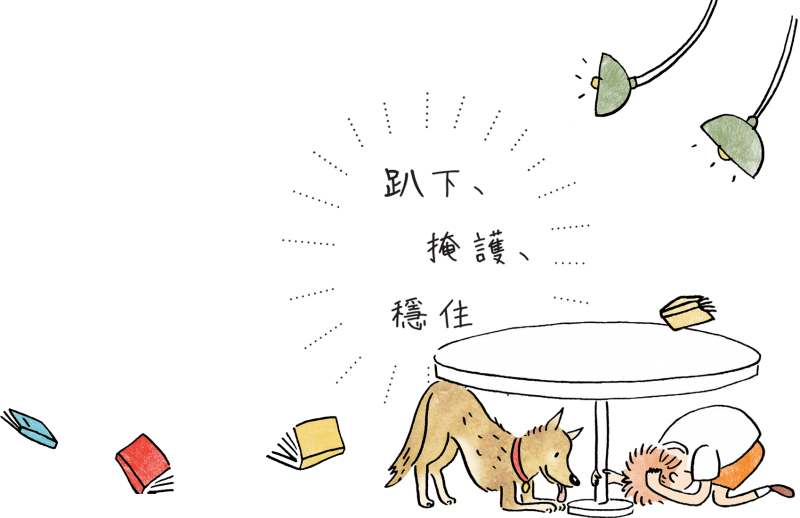 Let’s embark on journeys of discovery into the world of disasters with COPE. Make a difference today! Get Prepared and Be Ready! 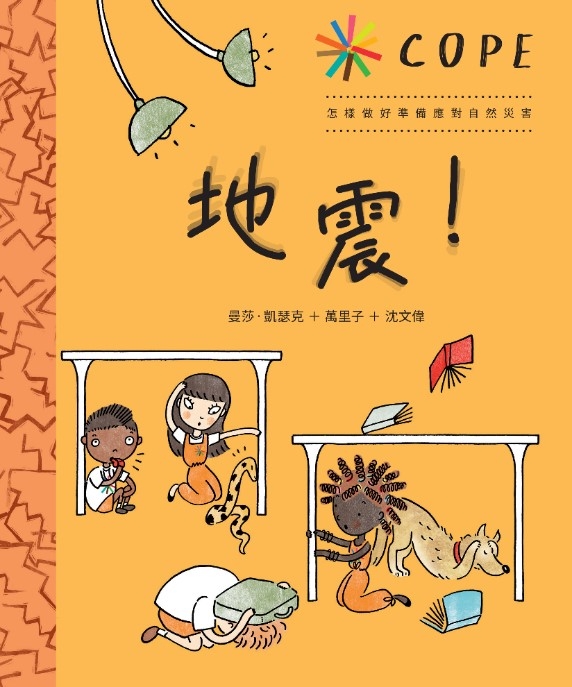 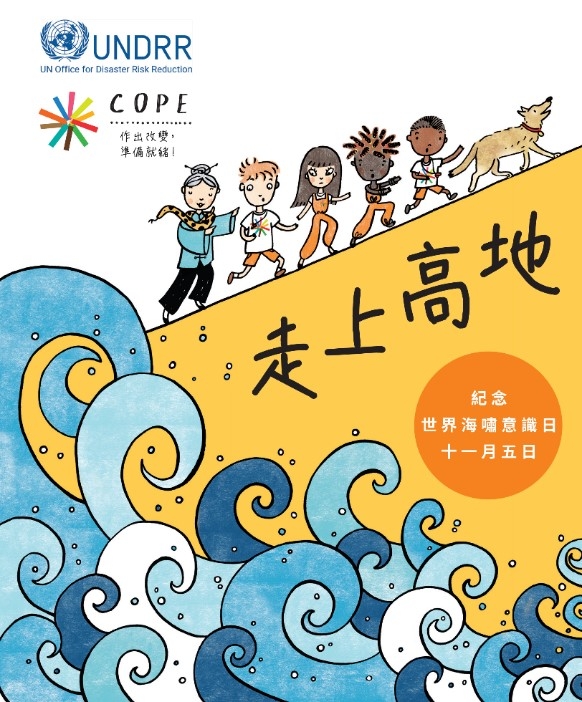 
The Global Author, Illustrator and Editor Team of the COPE:

- Mariko Jesse, the illustrator, studied at Central St Martins, where she was also an Associate Lecturer. She is a highly acclaimed freelance commercial illustrator, children’s book illustrator and printmaker specializing in Japanese woodblock printing.

- Dr Timothy Sim, the editor, is an Associate Professor in the Department of Social Sciences at Hong Kong Polytechnic University. He started out as a social worker, then specialized in family training and now focuses on disaster risk reduction writing many books in English and Chinese. 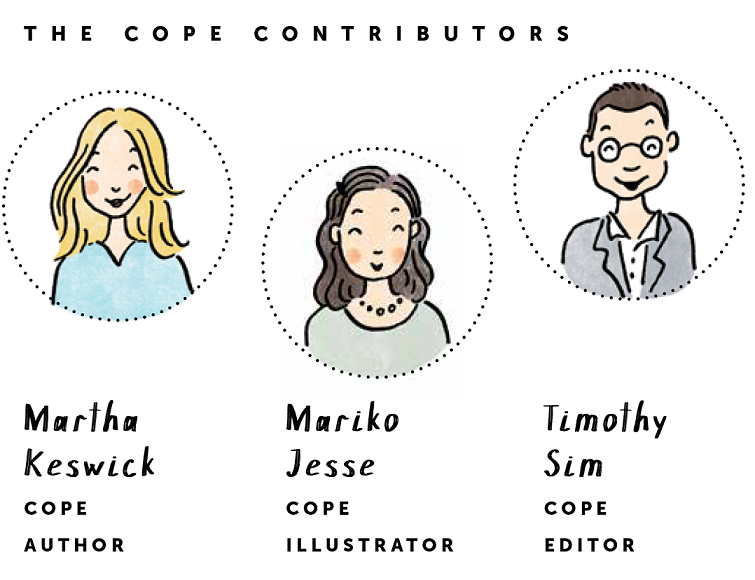 The Contents Localisation and Adaptation Team for Hong Kong Editions: The Annual International Day for Disaster Risk Reduction (IDDRR) will be held on 13 Oct 2019 (Sunday) this year.


What is the International Day for Disaster Risk Reduction?

International Day for Disaster Risk Reduction began in 1989, after a call by the United Nations General Assembly for a specific day to develop a culture of disaster risk-awareness and disaster reduction globally. Held every year on 13 October, the day reinforces how people and communities globally are reducing their risks to and impacts from disasters, and raising awareness in reducing their individual risks.

The 2019 edition will focus on Target (d) of the Sendai Framework, reduce disaster damage to critical infrastructure and disruption of basic services.


To prepare ourselves for the upcoming IDDRR, let’s have a look at some statistics on disasters around the world published last year.


The burden was not shared equally as Asia suffered the highest impact and accounted for 45% of disaster events, 80% of deaths, and 76% of people affected. Globally, Indonesia recorded nearly half the total deaths (47%), while India recorded the highest number of people affected (35%). Earthquakes were the deadliest type of disaster accounting for 45% of deaths, followed by flooding at 24%. 
Flooding affected the highest number of people, accounting for 50% of the total affected, followed by storms which accounted for 28%. Given Asia’s large land mass, higher population relative to other continents, and multiple hazard risks, the results are not surprising.


Hong Kong, most notably, was hit by Typhoon Mangkhut in 2018. The typhoon broke many typhoon records in Hong Kong, and although luckily there were no deaths recorded in Hong Kong from the typhoon, it rose an alarm for gaps in disaster preparedness individually and within communities.


In the past 10 years, floods were also the most common type of disaster to happen, accounting for 43.4% of all disaster occurrences, followed by storms which accounted for 28%. 
In the past decade, 56% disaster deaths were attributed to Earthquakes, most significant of which was the 2010 Haiti Earthquake and the 2011 Tohoku earthquake and tsunami. 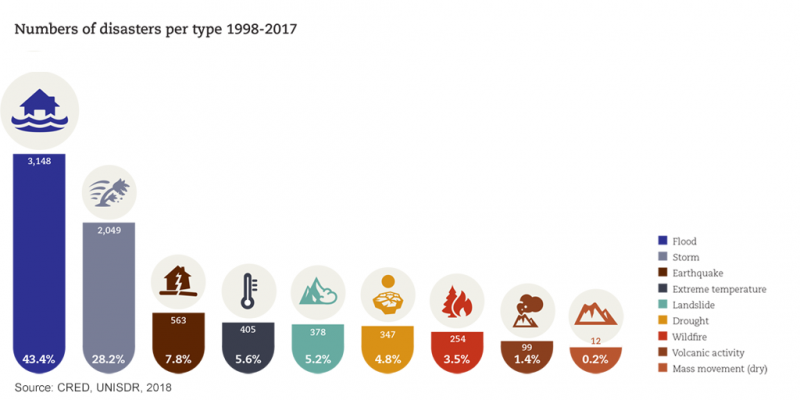 
Flooding affected 2 billion people in the past decade, most significant of which was the North India Flood in 2013 that killed nearly 6000 people; second was drought, that affected 1.5 billion, some of the worst which happened in developed regions such as Australia and North America. 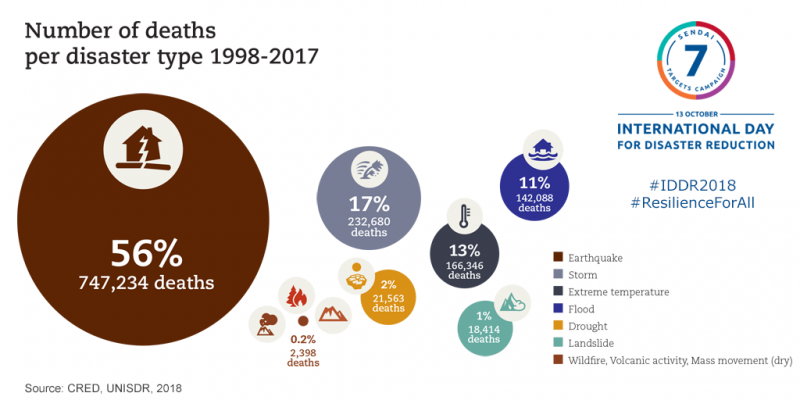 
However, Dr. Debarati Guha-Sapir, head of CRED at UCLouvain, reminds us that there are a lot of invisible impacts of disasters that may not be accurately recorded in these statistics, particularly those of drought and extreme temperatures are notoriously poorly reported, especially from developing countries, probably due to lack of awareness and the ambiguous impacts. He emphasizes that “The human impact of these events, are difficult to quantify, but it needs to be done urgently, especially in order to report on specific SDG target indicators. Therefore, innovative approaches that measure progress in resilience and the adaptive capacity of communities needs to be addressed by appropriate UN agencies.” 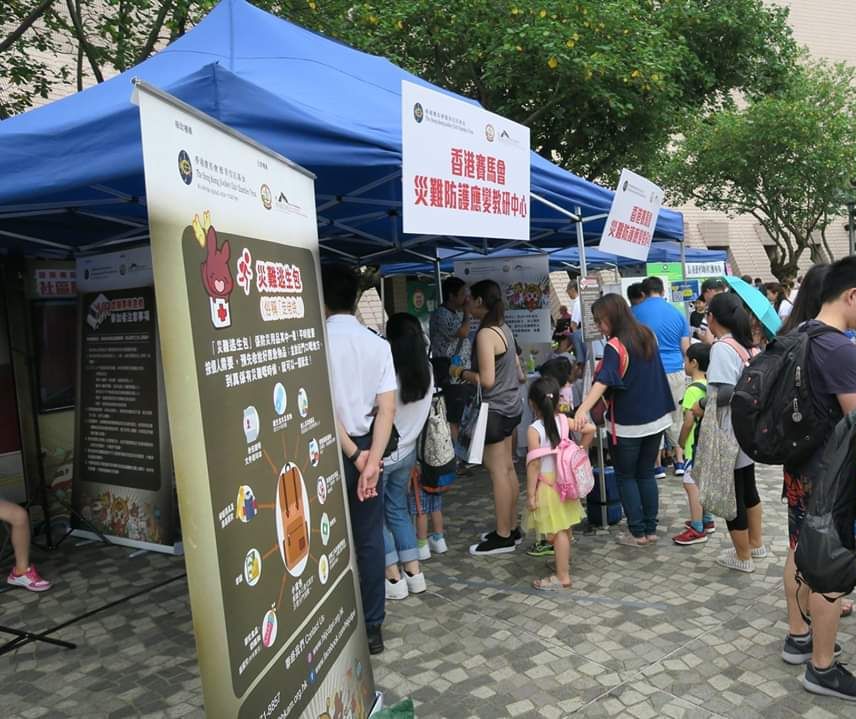 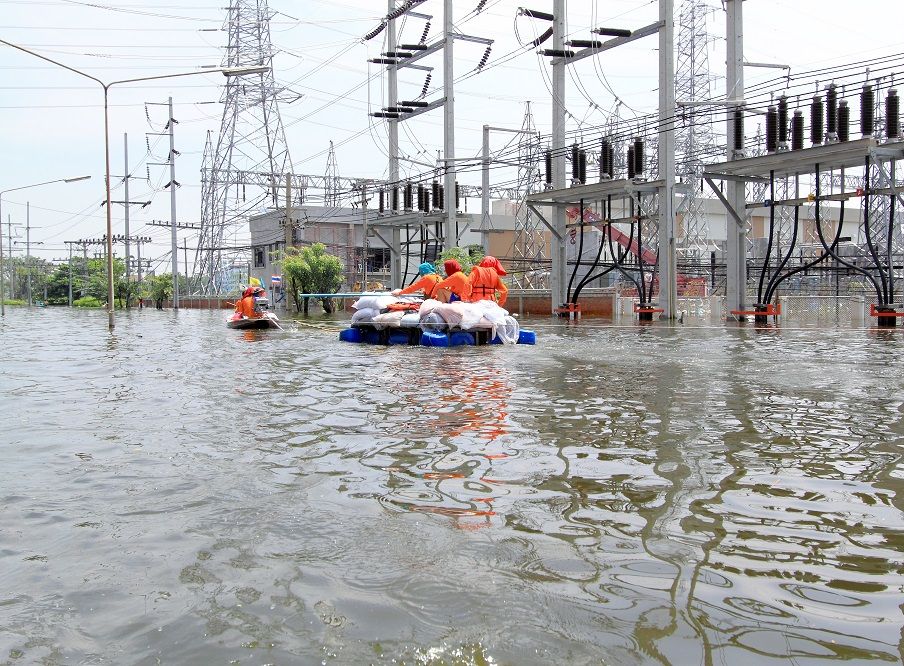