On 8 April 2015, the World Health Organization (WHO) established a Global Emergency Medical Teams (EMTs, previously known as “Foreign Medical Teams”) Initiative to enable WHO to build a global roster of EMTs ready to be deployed in sudden onset disasters. In September 2015, the “Classification and Minimum Standards for Foreign Medical Teams in Sudden Onset Disasters” was published, which introduced a minimum standard, and a simple classification and registration system for EMTs.

Since August 2015, the HKJCDPRI has contributed to various WHO EMT meetings, development of training curriculum and classification of teams, with a focus on China, including Hong Kong. Since September 2016, the HKJCDPRI, the University of Manchester Humanitarian and Conflict Response Institute (HCRI) WHO Collaborating Centre on Emergency Medical Teams, and the National Health and Family Planning Commission of the People's Republic of China (NHFPC) Health Emergency Response Office have been working together to develop the capacity of the Chinese National EMTs for national and international deployment. The project will also be looking to expanding into other countries in the Asian-Pacific region.

The HKJCDPRI has been supporting the work of the WHO Global EMT initiative by developing training and capacity building programmes in accordance with the WHO minimum standards, and through identification of best practice and facilitating development of standard field operating procedures to professionalize the EMTs.

More details of the HKJCDPRI WHO Global EMT project can be seen in here: 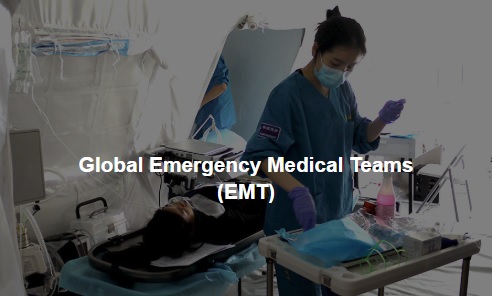